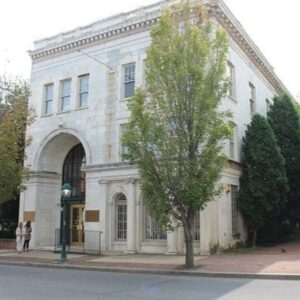 The Delaware County Historical Society, 408 Avenue of the States in Chester, was sold in August for $200,000.

The acting director of the Delaware County Historical Society (DCHS) wants the public to know that the Society and the county are working together to search for a new home for its museum and historical collections.

Last August, the Society building, at 408 Avenue of the States in Chester, was sold for $200,000 to local entrepreneur Ronald Starr, Sr., who has purchased several properties in that particular section of the city with the goal of rejuvenating the area.

Some members of the public have also raised questions about the sale, concerns about the low price, and have also expressed doubt about how the Society’s artifacts and documents are being handled.

DCHS Acting Director Paul Hewes said statements made about the alleged mishandling of documents and artifacts are blatantly false, adding that the building is in such disrepair that it would cost between $3 million and $5 million to renovate and make it safe for the public. 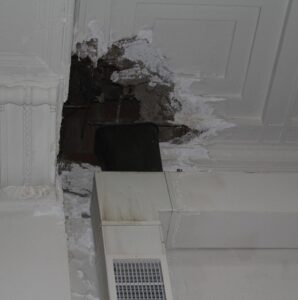 A large hole in the ceiling of the DCHS building in Chester.

“The HVAC system was found to have fungus, and areas of the building contain lead paint,” Hewes said. “Look at the ceiling and you will see a huge hole that would require a portion of not only the ceiling, but also the wall to be replaced. There have also been areas of flooding.” In addition, Hewes says the building is simply too large for the Society’s current needs: “It is very expensive to both heat and cool and frankly, the Society just does not have the funds.”

The agreement of sale between Starr and the DCHS says the Society has 18 months from the time of settlement to vacate the building. In addition, Starr is not charging the DCHS rent during that period.

Hewes, who holds a degree in history from Temple University, said the Society has sought the advice of a historical archivist and antiques specialist to help sort through the artifacts. “There are priceless items here and we are well aware of their significance,” Hewes said. “On the other hand, there are also items that were gathered at flea markets and garage sales that are worth nothing. We are not just randomly throwing things away as has been alleged.” 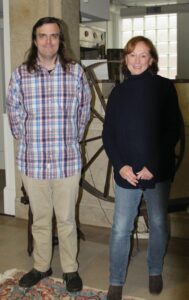 Hewes said the DCHS is working closely with County Council to find a suitable location that would be centrally located in the county with easy access for all residents. He also hopes to digitize information to make it readily available to the public.

The current DCHS building is located directly next door to the 1724 Chester Courthouse, the oldest public building still standing in the United States, which is listed on the US National Register of Historic Places.

The DCHS structure, a former bank building that was purchased by philanthropists Walter and Jayne Garrison in the 1990s for $72,000, housed a museum, children’s education center, research library, antique furniture, artifacts, and documents dating back to the days of William Penn. It is currently closed to the public for inventory. 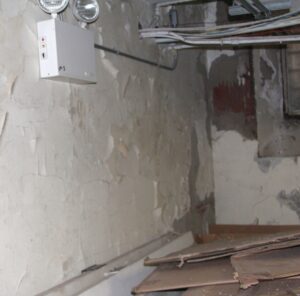 Cracking walls in the basement of the DCHS building in Chester.

Christine Gaydos, DCHS director of research, said the process of the sale and the inventory has been transparent and above board in every respect.

“We began the process of documentation in June and have gone through practically every box in here,” Gaydos said. “We have been transparent and it’s very unfair to say we have not.”

Both Gaydos and Hewes question the statement made by longtime volunteer Carol Fireng, who said that over $1 million was spent on renovations for the building. They do, however, admit that $80,000 was paid for a new elevator and $30,000 for a new roof.

A personal tour of the building revealed to a reporter cracking and peeling walls, water damage, the large hole in the ceiling, and other structural issues.

Hewes said he is very interested in the history of Delaware County because his family has lived within a 30-mile radius of it since 1675.

“We all want this information to be available to current and future generations,” Hewes said, “and we are doing all we can to make that happen.” Chester City Councilman Stefan Roots, who sits on the DCHS Board of Directors, praised Hewes’ efforts. 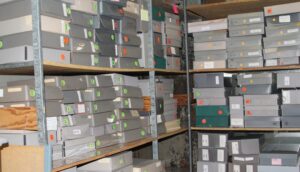 “Paul Hewes is doing yeoman’s work and should be congratulated and thanked,” Roots said. “We honestly all want what is best for the historical society and its important collection.”